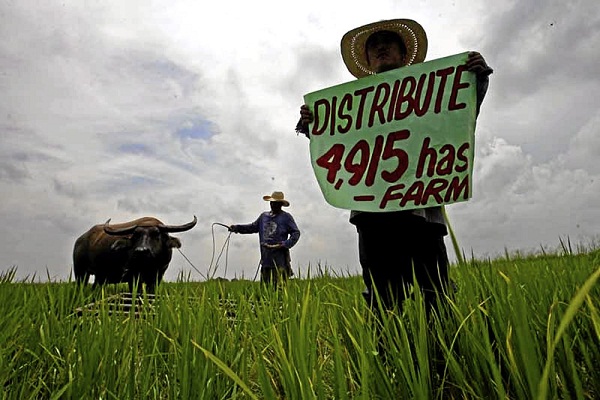 The Supreme Court on Tuesday upheld its November 2011 decision that just compensation for Hacienda Luisita in Tarlac province should be pegged on the value of the estate in 1989, and not on a higher valuation based on 2006 prices sought by the Cojuangco family, owners of the sugar plantation.

The high court’s final and executory ruling did not encompass an actual price for the sugar estate, but militants placed the 1989 value of the 4,335-hectare Hacienda Luisita at P173 million.

SC Administrator Justice Midas Marquez said the 8-6 vote settled the issue of which property valuation to use–1989 or 2006–in paying the Cojuangcos for distributing the plantation to its 6,000 tenant farmers.

It was not an open-ended decision that would have given the Department of Agrarian Reform or a special agrarian court the final say on the issue of just compensation for the Cojuangcos, he said.

For me, this latest decision gives the Hacienda Luisita farmers their long-awaited justice of owning the land that should have been theirs a years ago but the owners, the Cojuangco family constantly disobey the agreement with the government of redistributing the Hacienda Luisita way back in 1968 when the Cojuangco family through Ninoy Aquino managed to maintain the Hacienda Luisita’s control to theirs in spite of an agreement ten years earlier. In 1980, Ferdinand Marcos ordered to redistribute the Hacienda Luisita but it was never materialized because of opposition from the Jose Cojuangco’s family side through Ninoy Aquino (his wife was a daughter of Jose Cojuangco, Sr.) then EDSA I Revolution came in 1986 that propelled Cory Aquino to the presidency. In 1987, a year after the EDSA I, some Hacienda Luisita farmers stromed into Mendiola in a protest with the simple goal of redistributing the Hacienda, but what happened? some of them were massacred by the police forces who guarded the Mendiola Bridge to prevent any protesters to strom Malacañang directly. That massacre haunted Cory Aquino’s reputation as a savior of all Filipinos forever and forces her to enact a watered down “Comprehensive Agrarian Reform Program” in 1988.

The Comprehensive Agrarian Reform Program exempt the entire Hacienda Luisita from redistribution to the farmers by enacting and applying the option of “Stock Distribution Option” on which according to that provision, the farmers can own or have a part in Hacienda Luisita as stock holders however that’s not enough and in fact in spite of that, the Cojuangco family still considers them as a serf instead of a stock holder like in a typical business establishments as the Cojuangco family maintains the tight grip on ownership of the Hacienda.

Because of increasing poverty especially in the areas of Hacienda Luisita, the farmers decided to make a protest again to hear their plea for total ownership of a land they cultivated for many years in 2004 but what happened? like in Mendiola Massacre, 17 years earlier, some of the farmers were massacred allegedly with the direct order of the Cojuangco family. They were dispersed but their fight never stopped but instead that massacre encourage them to fight more for justifiable land distribution.

In November 2011, the Supreme Court ordered to redistribute the Hacienda Luisita once and for all with unanimous decision among the justices but it was not a final and executory. However, that decision seems to be unacceptable for the Cojuangco family of course as one of the members of their family, through the president Noynoy Aquino initiated a demolition job of destroying the pillar and integrity of the Supreme Court by impeaching the Chief Justice, Renato C. Corona with the alleged charges of unexplained wealth while he’s the Chief Justice and even before he took that position.

I hope that justice will be served once and for all and both sides should follow the Rule of Law whether the farmers or the Cojuangco family for the betterment of this country.